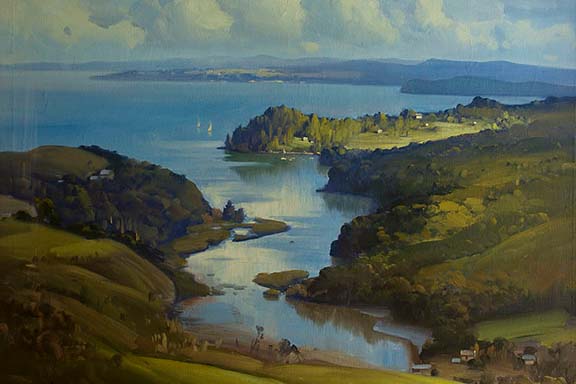 The Kelliher Art Competition, and the Trust to administer it, were established by Henry Kelliher: the founder, managing director, and subsequent chairman of Dominion Breweries. To enter, artists were required “to paint the visible aspects of New Zealand’s landscape and coastal scenes in a realistic and traditional way”. Later, prizes for portraiture and figure studies were added. The Trust’s collection largely comprises prize-winning paintings from the competition, held from 1956 to 1977, although for the last three competitions, in 1974, 1976 and 1977, the name was changed to the Kelliher Art Award for which five equal Awards were given, whether a landscape, portrait or figure study. In addition to purchases made from approximately 2007 to 2012 to update the collection a little, from 2015 the Trust has commissioned paintings by emerging landscape painters as a way of honouring Sir Henry’s original objective: to encourage the painting of New Zealand landscape.

This year’s selection does not have a particular theme. Rather, it attempts to represent the diversity of the collection. In part this is because in 2021 the focus of the Trust has been the development of a major touring exhibition, comprised of approximately a third of the collection from December 2021 through to early 2023.

The Kelliher Art Trust is delighted that Uxbridge Arts and Culture, Howick, will be presenting this collection from 24 January until 12 March.