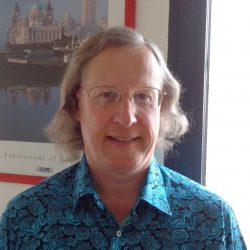 Nigel graduated MA from Auckland University in Latin, Ancient Greek and Modern Languages. He then lived abroad in a number of European countries for many years as a teacher of English as a Foreign Language, including 7 years in Oxford, UK, where he was able to study Sanskrit and further his knowledge of ancient European languages and the development of Proto-Indo-European through the university there. On returning to New Zealand 5 years ago, he developed courses on the history of language and has been delivering them at community education centres and privately.