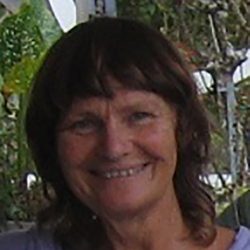 Gillian began working with clay in her cousin’s pottery studio when she was 14 years old. She was 24 when she was introduced to the recipe she calls ‘Soft Stone’. At that time she was busy having exhibitions of her flax forms and sculptural baskets. Soon the soft stone sculptures took over from the baskets. Her first shows were in the Pumphouse. She has taken classes with other sculptors but mostly worked developing her own style.

Many years and exhibitions later she developed her workshop which she has been running now for 11 years. She finds giving others the chance to discover the pleasure of creating is as fulfilling as her own work.

She says “thirty years on and I still feel excited when I know I have a block waiting for me to spend the day working on. It’s still a buzz to see the ideas the students come up with and the obvious satisfaction they feel at the end of the day. This material permits a freedom of expression in three dimensions that is so easy, that makes you feel you’ve achieved something, and leaves you wanting to go further. It makes you feel you are capable of more and that you can do it yourself at home.”